Wallace Stevens: A Dual Life as Poet and Insurance Executive. 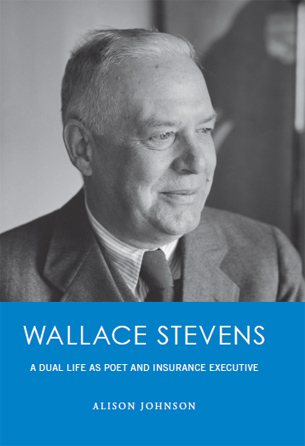 Alison Johnson has just published a new biography of Wallace Stevens. John N. Serio says of it, “Wallace Stevens: A Dual Life as Poet and Insurance Executive will reward both the well-seasoned aficionado and the novice. Those familiar with Stevens’s life will enjoy the fine synthesis that Johnson presents as well as be challenged by some of her provocative analyses. Those unfamiliar with Stevens’s life now have a compact and lively narrative of one of the most significant, yet mysterious, poets of the twentieth century.”

For more information on the book, visit www.wallacestevensbiography.com

(Containing events since 2011 only)

1. “‘On the edge of space.’: The Mental Imaging of Unimaginable Spaces in Late Stevens.” Claes Lindskog, Lund University, Sweden

This roundtable will be a momentous occasion for Vendler’s peers to reflect upon her importance to their own scholarship as well as Stevens studies writ large. Speakers will consider the ways that Vendler has shaped Stevens criticism, her approach to particular poems or types of work (such as the long poem), the debates that her readings and approach have kindled, and her consideration of Stevens in relation to other poets (e.g., Keats and Yeats).

Home from Guatemala, back at the Waldorf.
This arrival in the wild country of the soul…
—Wallace Stevens

Bonnie Costello is Professor of English at Boston University and the author of books and articles on Marianne Moore, Elizabeth Bishop, and many other modern and contemporary poets. Her most recent books are Shifting Ground: Reinventing Landscape in Modern American Poetry (Harvard UP 2003) and Planets on Tables: Poetry, Still Life and the Turning World (Cornell UP 2008) both include chapters on Wallace Stevens. She is currently writing Private Faces in Public Places: Auden and Others in the First Person Plural. Costello also writes about art and travel. She has won Guggenheim, Cullman and ACLS awards, and is a fellow of the American Academy of Arts and Sciences.

This festive and illuminating event will begin with a reception of wine and hors d’oeuvres, followed by Professor Costello’s presentation, and conclude with a book signing, birthday cake and champagne! Mark your calendar. Tickets ($50 per person) will be available in September.

This event is presented by Hartford Public Library (hplct.org)
and the Friends and Enemies of Wallace Stevens (stevenspoetry.org).

1. “Is and As Are One”: Professor Eucalyptus and the Material Culture of the late 1940’s; Von
Underwood, Cameron University

2. “A Rock and a Hard Place”; Holly Gallagher, University of Melbourne

This roundtable seeks to examine the two poets side-by-side and from a variety of angles: in relation to their aesthetics and critical essays, their poetic practice in terms of form and shared themes and interests (nature vs. city; the poet in history; visual and painterly poems; the relationship between music and poetry; poetry and belief), and, finally, the kinds of influence they exerted on postwar American poetry.

The Louisville Conference on Literature and Culture since 1900 (Louisville, KY)

1. “Flying Out of Sight? How the Critical Paradigms of World Literature and Genetic Criticism Affect Stevens’ Place within the Modernist Canon”
Bart Eeckhout, University of Antwerp

Session 17-C: Wallace Stevens and the Everyday: A Roundtable

2. “Aspects of Particulars: Seeing as in The Rock.” Charles Altieri, University of California, Berkeley

4. “Stevens and the Every Other Day.” Kamran Javadizadeh, Connecticut College

The 48th Annual Wallace Stevens Poetry Program featuring August Kleinzahler will take place on Tuesday, April 19 at 8 p.m. at the Konover Auditorium of the Dodd Center, University of Connecticut, Storrs.

Welcome to WordPress. This is your first post. Edit or delete it, then start writing!