The Wallace Stevens Society is seeking a new editor to lead The Wallace Stevens Journal. Please find the call attached. If you are interested, kindly send a brief letter of motivation and a CV to the current editor and President of the Society at bart.eeckhout@uantwerp.be and lisa.goldfarb@nyu.edu. Wallace Stevens’s musicality is so profound that scholars have only begun to grasp his ties to the art of music or the music of his own poetry. In this study, two long-time specialists present a polyphonic composition in which they pursue various interlocking perspectives. Their case studies demonstrate how music as a temporal art form may affect a poetic of ephemerality, sensuous experience, and affective intensification. Such a poetic, they argue, invites flexible interpretations that respond to poetry as an art of textual performance. How did Stevens enact the relation between music and memory? How can we hear his verse as a form of melody-making? What was specific to his ways of recording birdsong? Have we been missing the latent music of Richard Strauss, Gustav Mahler, and Claude Debussy in particular poems? What were the musical poetics he shared with Igor Stravinsky? And how is our experience of the late poetry transformed when we listen to a musical setting by Ned Rorem? The Poetic Music of Wallace Stevens will appeal to experts in the poet’s work, students of Modernism in the arts, and a wider audience fascinated by the dynamics of exchange between music and poetry. 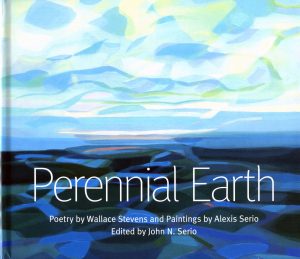 The book pairs over thirty of Stevens’s most admired poems with Alexis Serio’s abstract landscapes. Although the paintings were not created in response to Stevens, they share with Stevens a reliance on landscape to express deep thought and feeling as both artist and writer celebrate planet Earth. Glen MacLeod, in his introduction, writes, “The vibrant, colorful paintings of Alexis Serio are the immediate attraction of this book. . . . “[Both Stevens and Serio] share a central interest in landscape as well as a sense that the natural world is an accurate register of the human spirit.” To order a copy of this attractive coffee-table book, visit www.alexisserioart.com.

Here’s what people are saying:

“Perennial Earth is an intellectual and emotional masterpiece that will not disappoint. Each marriage of painting and poem pays tribute to words of the poet himself: ‘The most beautiful thing in the world is, of course, the world itself.’”—Michael Escoubas, review in Quill & Parchment

“Perennial Earth is not ‘a compensation for what has been lost,’ to borrow a phrase from Stevens, but a celebration of what is. Both painter and poet are seen here, as Stevens puts it, ‘ploughing North America,’ with flourishing results.” —Dennis Barone, poetry editor of The Wallace Stevens Journal

“The combination of Alexis Serio’s remarkable paintings with well-known poems by Wallace Stevens creates a joyful dance celebrating the ever changing planet of which we are a part.” —Jacqueline Vaught Brogan, author of several books on 20th century poetry, including Part of the Climate: American Cubist Poetry

“The book is a feast for the eyes and the mind.”—Suzanne Pundt, biologist 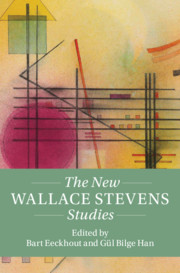 The New Wallace Stevens Studies introduces a range of fresh voices and promising topics to the study of this great American poet. It is organized into three sections. The first explores concepts that have begun to emerge in Stevens criticism: imperialism and colonialism, his politics of utopia, his ideas about community-building and audience, his secularism, and his transnationalism. The second section applies recent methodological and theoretical advances that have left a prominent mark on literary studies – from world literature and ecocriticism to urban studies, queer studies, intersectional thinking, and cognitive literary studies. Essays in the third section reassess issues that have long inspired critics. Here investigations include Stevens’s reception by later poets, his attitude toward modern fiction, different modes of his poetic thinking, aspects of his rhetoric and style, and his lyrical ethics. This volume captures a cross-section of the most striking recent developments in Stevens criticism. 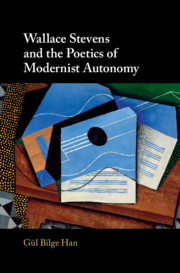 Wallace Stevens and the Poetics of Modernist Autonomy presents a rethinking of modernist claims to autonomy by focusing on the work of Wallace Stevens, one of the most renowned poets of the twentieth century. By showing how multiple socio-political currents underlie and motivate Stevens’ version of autonomy, the book challenges the commonly received accounts of the term as art and literature’s escape from the world. It provides new and close readings of Stevens’ work including poems from different stages of the poet’s career. It re-energizes a tradition of historicist readings of Stevens from the 1980s and 1990s. The study of Stevens’ work in this book is developed in constant dialogue with current studies in modernism and aesthetic theory, particularly those offered by Jacques Rancière and Alain Badiou. The book explores the question of autonomy in Stevens’ exploration of the aesthetic and social domains, and the vexed issue of his poetry’s relation to philosophical thinking. 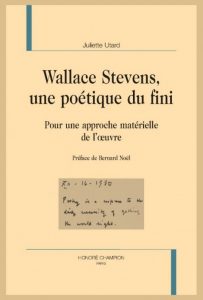 In stark opposition to the accepted definition of modernism as an aesthetics of the incomplete, this study on Wallace Stevens identifies a novel dialectic: a rejection of closure on the one hand, and an affirmation of finitude on the other, which requires a heightened investment in the materiality of the completed book. 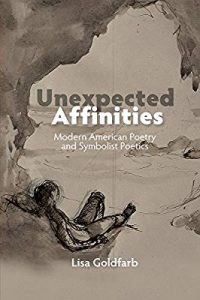 Unexpected Affinities: Modern American Poetry and Symbolist Poetics studies the impact of Stevensian and Valéryan poetics, and symbolist poetics more broadly, on a range of Anglo-American poets in untypical fashion. Pairing poets who are not usually studied in their relation to one another reveals mutuality and dissimilitude. Chapter I looks at Stevens and Valéry from the vantage point of the senses as opposed to the more usual lens of their similar cerebral or philosophical temperaments. Although critics have largely and justifiably seen Stevens and Eliot in oppositional terms (Stevens proclaims them “dead opposites”), Lisa Goldfarb asks what happens when we look at them from the vantage point of their mutual interest in creating a musical poetics. Auden is principally known for his distaste for the symbolists and their magical poetics, yet he reserves special praise for Valéry and considers him as his poetic mentor; Chapter III studies their poetics side-by-side. With Stevens’ and Auden’s mutual appreciation of Valéry as a starting point, Chapter IV turns to a closer comparative study of Auden and Stevens, two poets who have traditionally been seen as operating in distinct poetic spheres. While Elizabeth Bishop famously eludes categorization in terms of poetic school or affiliation, a fifth chapter addresses her poetic music in relation to French symbolist poetics, one of the many poetic schools she admired. A sixth and final chapter examines Stevens’ musical legacy, in large part derived from the symbolists, and addresses the work of a range of modern and contemporary poets, with a final section devoted to the work of contemporary poet, Susan Howe. 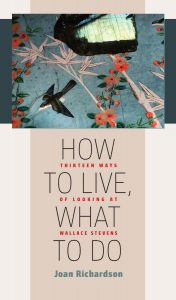 How to Live, What to Do is an indispensable introduction to and guide through the work of a poet equal in power and sensibility to Shakespeare and Milton. Like them, Stevens shaped a new language, fashioning an instrument adequate to describing a completely changed environment of fact, extending perception through his poems to align what Emerson called our “axis of vision” with the universe as it came to be understood during his lifetime, 1879–1955, a span shared with Albert Einstein. Projecting his own imagination into spacetime as “a priest of the invisible,” persistently cultivating his cosmic consciousness through reading, keeping abreast of the latest discoveries of Einstein, Max Planck, Niels Bohr, Louis de Broglie, and others, Stevens pushed the boundaries of language into the exotic territories of relativity and quantum mechanics while at the same time honoring the continuing human need for belief in some larger order. His work records how to live, what to do in this strange new world of experience, seeing what was always seen but never seen before. 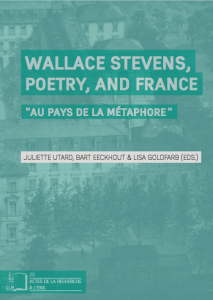